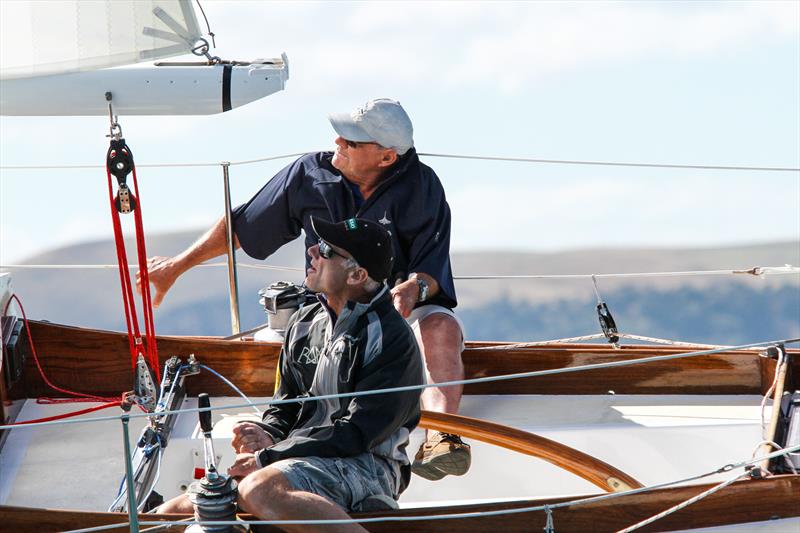 Chris Bouzaid is all concentration at the helm of Rainbow II – One Ton Cup Revival – Race 2 – March 2, 2015 © Ivor Wilkins/Offshore

Chris Bouzaid has been called the father of New Zealand international keelboat yachting – who inspired the likes of Sir Peter Blake and Grant Dalton.

He was the first non-Australian to win the Sydney-Hobart Race. First non-European to win the One Ton Cup which, in those days, sat only behind the America’s Cup in terms of importance. He was part of the New Zealand team that finished 1, 2, 3 in the 1971 Sydney-Hobart Race, something that had never been done before, and which saw New Zealand win the Southern Cross Cup.

These achievements saw Chris named New Zealand sportsman of the year in 1969, and he was also inducted into the New Zealand Sports Hall of Fame, awarded an MBE and listed as one of New Zealand’s sportsmen of the 20th century.

But Chris considers himself more of a businessman than a top yachtie, and also ran one of the world’s biggest sail making businesses. It was something he was thrust into early in life, taking over his dad’s business with his brother when only a teenager, but he recognised the importance of marketing and did a lot of this through his yachting exploits.

In this Broad Reach Radio podcast, Yachting NZ‘s Michael Brown, traverses a lot of Chris Bouzaid’s career on and off the water, and the part he played in awakening New Zealand’s passion for international yachting. He tells the story of the day he shared the front page with the moon landing; how he won 121 races with his famous yacht Rainbow II; the impact hosting the 1971 One Ton Cup had on this country; and the embarrassing, but scary, tale of his worst wipeout ever.

Links to all 37 episodes in Broad Reach Radio series can be found here.

ABOUT DOYLE SAILS // As sailors, our obsession with sailing connects us to the water. The water is our playground, a sanctuary where we seek enjoyment, a competitive playing field where we race; it’s sometimes our home and always a place that unlocks our sense of adventure wherever that adventure might take us.

Our obsession with sailing takes us to every corner of the world and onboard every yacht. We become part of teams, share in the adventures of friends and families, sharing our knowledge and experience with those who have the same passion for sailing as we do. Sailing is in our DNA, where the water unlocks our sense of adventure. We are the custodians of a legacy that has been supporting sailors for close to four decades, and while our world changes around us, our commitment to sailors who seek the same enjoyment and adventure as we do hasn’t. From our sailors to yours, we are your experts in sailing. Your adventure starts with Doyle.